The new court is the first to be built at a local authority leisure centre in the UK. It has been funded entirely by Section 106 developer contributions, financial payments made by housing developers in Burgess Hill that fund local infrastructure improvements.

Padel tennis is a rapidly growing sport that is a cross between tennis and squash. It’s played on an enclosed court about one third the size of a tennis court. The rules, which are available at the Centre, are similar to tennis. Players use slightly less pressurised tennis balls, serving is under-arm and the court walls are used as part of the game. Professional tennis stars Novak Djokovic, Rafael Nadal and the Murray brothers are all known to play padel tennis.

Tom Carter, Contract Manager at Places Leisure who manage the facilities said: “The new padel court will provide exciting and new opportunities for members of our local community to maintain a healthy and active lifestyle. Through this investment we are able to expand our activities even further, offering more fun and social sporting opportunities that the whole community can enjoy. Together with Mid Sussex District Council we are looking forward to welcoming our members and local residents to try out these first-class facilities for themselves and try their hand at Padel Tennis, one of the latest sporting crazes!”

To encourage people to give this fantastic new sport a try, the court is available to book for free throughout the rest of July. If anyone would like to hire four padel raquets and a set of balls, they are available from The Triangle.

Fresh from a knock about on the court, Councillor John Belsey, Cabinet Member for Environment and Service Delivery said: 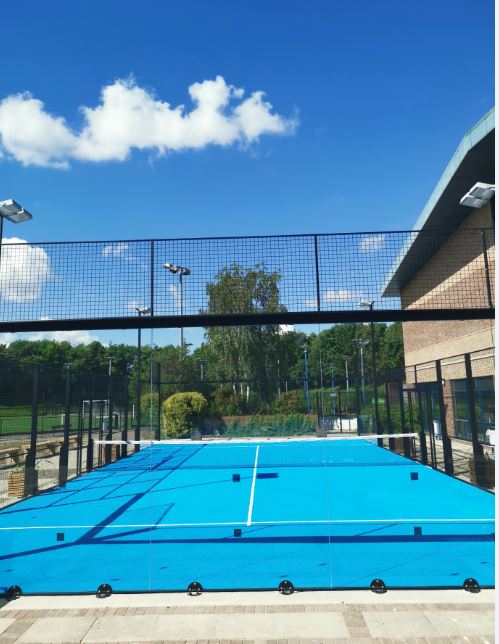 “Padel tennis is tremendous fun and it’s a sport that can be enjoyed by players of all ages. It’s less reliant on power than similar games like tennis or squash, which makes it accessible to players of all abilities.

“Even if you only have very limited experience of playing racquet sports you can quickly engage in dynamic and fun rallies. Also, padel tennis is mainly played in doubles, which makes it very social and therefore ideal for the entire family.”

An Open Day/Exhibition will take place on Saturday 27 July between 11.00am-4.00pm at which England ranked padel tennis players will be demonstrating the skills of the game.

Details will be released shortly about group sessions, opportunities for coaching and the formation of leagues.