Dave explained that being in the water is the ‘only opportunities to have one-on-one time’ with his son, that’s why he’s backing the latest #LoveSwimming campaign.

The new research from the campaign found that swimming is the best activity for making pre-school age children happy and creating special bonding moments with their parents.

It also revealed toddlers being active in the water with their parents or guardians can lead to them enjoying better sleep and improved movement.

Reflecting on his experience taking each of his four children swimming when they were at toddler age, and the fulfilment he himself has got from spending time in the water with his family, Dave says he is ‘not surprised’ by the findings of the new study.

He said: “Being in the pool, it’s a generally warm and inviting environment to introduce children to water.

“Lessons are more structured, and I’m really appreciative of teachers who help support parents to do session with their children and get the most out of it.

“I enjoy swimming with my child because it one of the only opportunities to have one-to-one time with him due to work – and having three other children it’s also great to see their confidence grow in the water.

“I’m not surprised whatsoever at the Swim England research results. I think watching your child develop a life skill and be happy in the water is so rewarding and you have so much fun together.”

The findings show that swimming not only boosts the physical and psychological development of children, but parents have also noticed many other benefits.

Nine in 10 agreed it has helped to develop their child’s movement and co-ordination skills, with four out of five pre-school parents say that swimming helps their child sleep better.

As part of the #LoveSwimming campaign, the aquatics sector has united to highlight how according to parents themselves, swimming with their little one ranks as one of the best activities for boosting happiness and bringing children and parents closer together.

Swim England and 10 leading operators are working together to urge more parents to consider the benefits of swimming with their children.

After a successful Commonwealth Games for the nation’s swimmers, Swim England chief executive Jane Nickerson emphasised the value of swimming at a recreational level and to the nation’s health and wellbeing.

Jane said: “This new research is the first to explore the benefits of swimming for toddler age children and their parents, and supports what we know already regarding swimming’s invaluable contribution to the health and wellbeing of the nation.

“Swimming saves the UK health and social care system more than £357 million a year and clearly its’ benefits are felt by both parents and their children.

“Owing to our new research, parents report that their child’s sleep habits, happiness, mental wellbeing and confidence are all improved by swimming.

“But not only does regular swimming support children in their broader development and provide them with an essential life skill, we now know how much parents value that bonding time spent with their child in the water, and how much of a positive impact this has on their happiness levels. 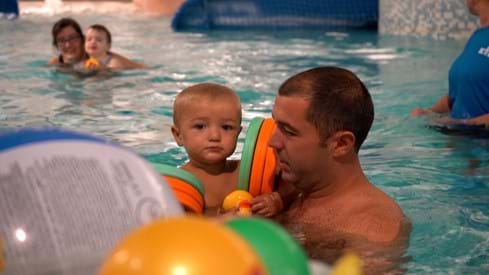 “I would urge any parent to make the most of time with your children, and prioritise quality time together – swimming is one of the best activities you can do as a family that makes you happier and healthier together.”

To sign up to adult and toddler sessions at your local pool, complete our enquiry form below.

Read how London mum Charlotte has developed a stronger bond with her son through swimming.

Read how Emily gets joy from swimming with her son.